A few months ago I posted an entry about the importance of rugby in Tonga. Well, one post was not enough because this past month has shown me that Tonga is even more obsessed with rugby than I originally thought. The Rugby World Cup started earlier this month, and I never anticipated the team spirit that would encompass the entire country of Tonga.
Tonga played in the opening game of the World Cup this year against New Zealand. At school, we were told to wear red to support the Tonga national team, the Ikale Tahi (Sea Eagles). Not only were the people at school wearing red, but everyone was wearing red that day. There were tons of spontaneous parades, all the high school bands played in town, and every person made sure to find a t.v. to watch the game. Unfortunately, Tonga lost to the All Blacks, but it did not lessen the excitement surrounding the event. 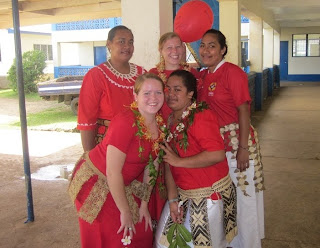 Last night was Tonga’s last game in the World Cup. The Ikale Tahi had too many losses to advance to the quarterfinals, but they certainly went out in style. The pulled off an incredible win over France, which was the biggest upset of this year’s World Cup. The after match celebrations here in Vava’u were fabulous. Tons of people got into vehicles and drove around beeping horns and blasting music. Those without vehicles watched from the street, cheering and dancing. There were fireworks being set off from the back of a truck, water being tossed on the crowd, and lots of make-shift drums. Even the police and fire vehicles joined in the celebrations, circling around town with their sirens blaring. 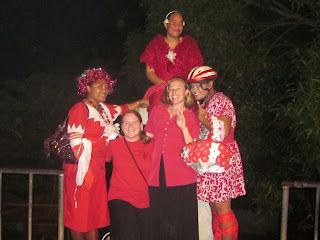 I had so much fun celebrating Tonga’s win last night. It helped me appreciate the pride that goes into everything Tongans do; supporting the Ikale Tahi, singing in church choirs, welcoming visitors. The list goes on, but I hope I can also learn to do things with just as much pride and enthusiasm.
Go Ikale Tahi Go!
Posted by Charity at 9:42 PM