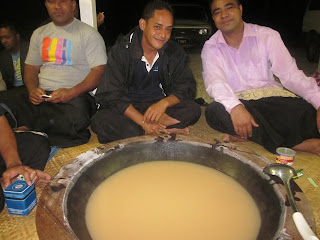 Kava is a drink commonly found in the Pacific. It is made from the ground root of the kava plant, which is similar to the pepper plan. The taste is slightly bitter, but mostly it tastes like gritty water. People drinking kava do become intoxicated. However, the effect is not the same as alcohol. Kava numbs the mouth and tongue and produces a calm and relaxed feeling. The day after, kava drinkers often sleep excessively, or if they do wake up, often spend the entire day in a state of lethargy.

In Tonga, men drink kava and women serve kava. At first, my feminist side was appalled by this gender segregation. But more and more I suspect that women don't want to drink kava anyway. It tastes bad, makes you lazy, and it can be really boring. I don't foresee Tongan women to joining kava circles anytime soon.

The woman serving kava is called a to'ua. She sits in front of the kava bowl (kumete) and stirs the kava whenever the men signal they are ready to drink. She then spoons the kava into cups made of coconut shells which are first passed to the men at the head of the circle (the most important people, like nobles, chiefs, and ministers) and then to the men closer to the to'ua.

Traditionally in Tonga, kava circles were the time for single boys and girls to meet, flirt, and even arrange marriages. If a boy found a girl  he liked, he would go to her house and ask permission to hold a kava circle there. Later he would come with male friends and family members to drink kava and talk to the girl. If everything went well, eventually the two would be married.

I have served kava countless times now. Usually I will agree to to'ua if there is a kalapu, a fundraising event. At these fundraisers they collect money for schools, churches, sports teams, and more. I have had lots of great experiences. I enjoy listening to the music, flirting with cute Tongan boys, and receiving endless compliments. Usually it is pretty fun. The downside is sitting on the hard floor for up to 6 hours in a row, legs cramping and falling asleep, and men making rude comments.

Kava is a unique part of Polynesian culture. Whether drinking kava or serving kava, it is something I recommend as an interesting experience for anyone living or working in Tonga.