Picking up where I left off last post, dad’s next activity was a dinner at my house. Some of my Tongan girlfriends came over to cook and the two other volunteers from my school, Sean and Ashley, came over, too. We had lots of yummy food like crab salad, beef with pele, papaya, roast chicken, fried rice, and bananas in coconut milk. It was also nice for my dad to meet some of my non-peace corps friends.

Later that evening, we went to see the fakaleiti show. For those of you who don’t know, fakaleitis are Tonga boys who are raised as girls. Some of the boys grow up and begin dressing like men, but others continue to dress and act like women. I convinced my dad to go see the show because it truly is a unique cultural experience. 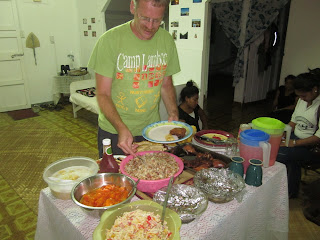 Thursday was my weekly music class at the kindergarten, always a highlight of the week. Friday another volunteer, Kalo, invited us to a concert for her church. This concert was a fundraiser, so there were lots of prepared dances. Some were to contemporary worship songs and others were traditional Tongan dances. There were also several skits that were very entertaining. 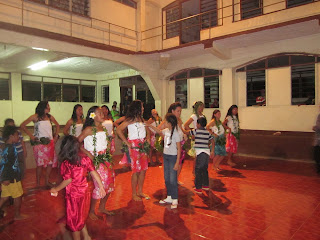 Saturday was our adventure to motu (an outer island). In typical Tongan style, we went to the wharf to find a boat and none of the boats were going to the island we wanted. We shopped around at the market for a while we tried to figure out what to do. Thankfully I spotted someone from the island and asked him if a boat was coming, and he told us one would be coming shortly. After a while the boat came and we were loaded on along with some of the villagers and lots of food for Sunday lunch. We arrived in Nuapapu and went to see Farfum, the peace corps volunteer at that site. Farfum and his principal showed us their school and gave us a tour of their village. I was happy my dad got to see an outer village where life is very different from life in town. The only electricity comes from solar panels and generators, and most people only have water from the rain water tanks. Also, there are no cars, only horses. It makes Transfer seem like a booming metropolis.

Sunday we went to church at the Catholic church with my boyfriend. After church, we had lunch at his house with his family. There was lot of fantastic food and it was fun to eat faka-Tonga; the whole family sitting on the floor.

During dad’s last week here I was teaching, so he spent lots of time helping do things around my house and relaxing. His big project was painting my shower floor…it looks great! He also helped with dishes and laundry, which was much appreciated. Also during the week we played volleyball, went to a baptism, ate at a Tongan restaurant, and went to trivia night. However, I think dad’s favorite part of the week was teaching music at the kindergarten. He taught them a new song, and a McDonald family classic, “Down by the Bay”. 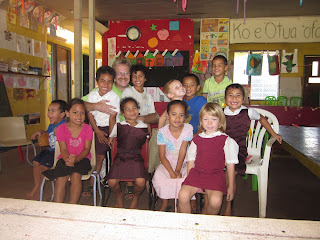 For dad’s last day, we had a lunch that my co-teachers and students prepared at the catering school. It was a nice way for them to say goodbye, and they also generously brought many Tongan gifts for dad to take back to America like jewelry, tapa cloth, fans, and a map of Vava’u. After lunch, dad and I watched some soccer, which was very entertaining. I always got in trouble for laughing at Wesley’s soccer games, but here in Tonga laughter is part of the game. Dad and I had quite a few good laughs during the game. Friday night a few people game over to my house for dinner. Then dad spent his last night listening to the dogs, pigs, and roosters, probably one part of Tonga he will not miss. 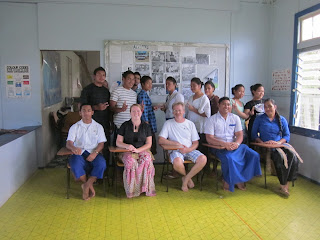 Saturday morning it was time to say goodbye. We had our last cinnamon rolls from the bakery for breakfast at the airport, and then dad took off for his long journey back to America. It was hard for me to see him leave, but I take comfort in the fact that I will be returning to America for Christmas this year, and I will have the opportunity to see my whole family. It was awesome having a visitor here, and I hope there will be many more in the future!